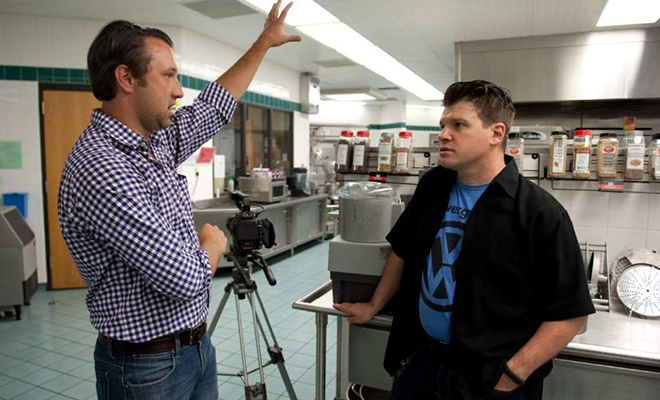 Filmmaker Josh Baldwin of Lewisburg, W.Va., directs Richard Rosendale, while filming a documentary about Rosendale and his career at the Westmoreland County Community College on Friday, June 13, 2014.

Documentary filmmaker Josh Baldwin meticulously lined up his cameras in the culinary arts kitchen at Westmoreland County Community College, adjusting the tripods and setting up shots at different angles.

Baldwin and his wife, Mary, of Lewisburg, W.Va., stopped at the college near Youngwood on Friday morning to film part of their documentary about chef Richard Rosendale's journey to the Bocuse d'Or, dubbed the world's most challenging and prestigious culinary competition.

Rosendale, 37, a Uniontown native who graduated from WCCC's culinary arts program in 1997, represented the United States in the 51⁄2-hour, live pairs cooking competition in January 2013 in Lyon, France. He and partner/sous chef Corey Siegel placed seventh out of 24 teams.

Baldwin and Rosendale met while working at The Greenbrier, a resort in White Sulphur Springs, W.Va., where Rosendale served as the youngest executive chef in its history. Rosendale trained for the competition in a former war bunker built below The Greenbrier, where he constructed a kitchen that was an inch-for-inch duplicate of the one he would use in France.

“I got to know his work habits, which really impressed me,” Baldwin said.

Documentary filming began in early 2012 and captured a year of Rosendale's extensive preparation, including boxing lessons for stamina and strength, as well as two weeks in France for the competition.

The film, tentatively called “The Contender,” is expected to debut this fall on screen in Lewisburg and on iTunes, Amazon and Blu-ray disc, Baldwin said.

On Friday, Baldwin interviewed Rosendale behind a stainless steel kitchen counter and in the lobby of Commissioners Hall, where a plaque designates him as one of the first inductees into WCCC's Culinary Arts and Hospitality Hall of Fame.

The team interviewed culinary arts professor Cindy Komarinski, who said she still uses Rosendale's detailed apprenticeship logs as an example for her students.

“(His log book) was big and thick,” Komarinski said. “He was already showing that drive.” 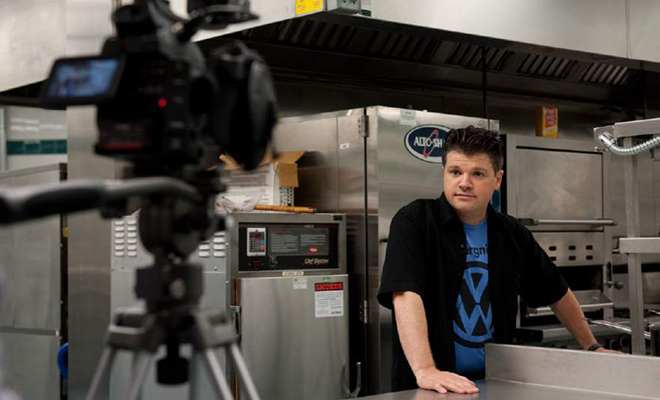 Richard Rosendale films a documentary about his life and career at Westmoreland County Community College on Friday, June 13, 2014. A Uniontown native, he started his formal training in WCCC's culinary program.

After their stop at WCCC, the team was heading to interview Rosendale's mother, Sharon Rosendale, in Uniontown and then to Fallingwater, architect Frank Lloyd Wright's iconic building in Fayette County, which inspired the design of Rosendale's platter for the competition.

The custom-designed platter featured many unusual cut-outs and cost about $10,000, Rosendale said.

“It's an expensive endeavor, for sure,” he chuckled.

Rosendale appears as one of two chefs on the CBS show “Recipe Rehab,” which asks families to submit their favorite high-calorie, family-style recipes, then the chefs compete to give the recipe a healthy makeover. The family then makes the rehabbed recipes in their own kitchen and chooses a new favorite.

Rosendale, his wife, Laura, and their three children live in Lewisburg. He said shooting for season three of “Recipe Rehab” will begin in August in Los Angeles.

Article by the Pittsburgh Tribune.