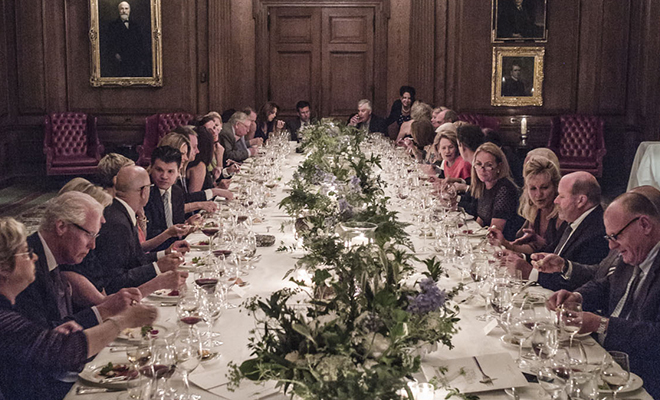 Dinner at the Duquese Club as a tribute to Thomas Keller with surprise speaker, Rich Rosendale. Photo by: George Thomas Mendel

It turns out, it takes 60 servers, 40 cooks, the restaurant kitchen, four satellites and 16 rooms over four floors to honor one of the most revered chefs in the United States. Or that’s how it’s done at the Duquesne Club, Downtown, the setting for last night’s tribute to Thomas Keller benefiting the Pittsburgh Botanic Garden, which will open 60 of its 460 acre-holdings to the public in August.

More than 350 guests paid $350 to attend the dinner, a work-in-progress since last year. Countless meetings and two tastings later, chefs Keith Coughenour of the Duquesne Club, Derek Stevens of Eleven in the Strip District, Tim Fetter of Eat’n Park Hospitality Group and chef-owner Justin Severino of Cure in Lawrenceville decided on a lavish spread of charcuterie and 11 hors d'oeuvres for the cocktail hour and a three-course, seated dinner that started with a foie gras torchon, led into a cured salmon with beets, smoked goat cheese, Marcona almonds and Egyptian star flowers and finished with a rack of Elysian Fields lamb, ramp persillade and sweetbread crepinette.

The event coincides with the 20th anniversary of the opening of Mr. Keller’s most famous restaurant, The French Laundry in Yountville, Calif., which will close for major renovations and an expansion for a few months this summer.

It was fitting that Mr. Keller visited the region so close to Father’s Day, since his father was from Pittsburgh. In 2006, Ed Keller moved to Yountville to be closer to his son. He died in 2008.

Mr. Keller also has ties to the region via Elysian Fields Farm in Waynesburg, the farm that raises lamb for his restaurants, as well as his partnership with All-Clad Metalcrafters, a cookware company based in Canonsburg.

The event featured a few surprises for Mr. Keller, such as the attendance of Uniontown native Rich Rosendale. Now a master chef, the alum of the Duquesne Club kitchen went on to become executive chef of the Greenbrier Resort in White Sulphur Springs, W.Va., and captain during the prestigious Bocuse d’Or in Lyon, France, for which he was mentored by Mr. Keller and chef Daniel Boulud.

In honor of Mr. Keller, the Friends of the Botanic Garden donated $10,000 to the Ment’or BKB Foundation, formerly known as Bocuse d’Or Foundation USA, to support the 2015 team. Another surprise attendee was Lee Jones, a well-known farmer who procures rare, high-quality edibles at his farm, The Chef’s Garden in Huron, Ohio.

The dessert feast required guests to return to the main dining room to choose from an elaborate spread of cakes, sorbets and chocolates. Stations for cupcakes and creme brulee allowed for custom creations, while apothecary jars displayed homemade Mallomars and Nutter Butters. Duquesne Club pastry chef Will Racin and April Simpson led a team of bakers in creating the desserts.

The rhythm of the evening ran from silent intensity to a relaxed groove. The front and back of the house was especially tense in the early part of the evening. The spell broke around 6 p.m. when Mr. Keller, looking stately in a fine suit, swept through the kitchen to meet staff before the event began. Servers, cooks and and visitors from every corner of the kitchen came out to greet him. As he swept out, Mr. Coughenour, dressed in whites, walked by as teams of cooks plated hors d'oeuvres. He took a breath and sighed saying to no one in particular, “Isn’t this exciting.”