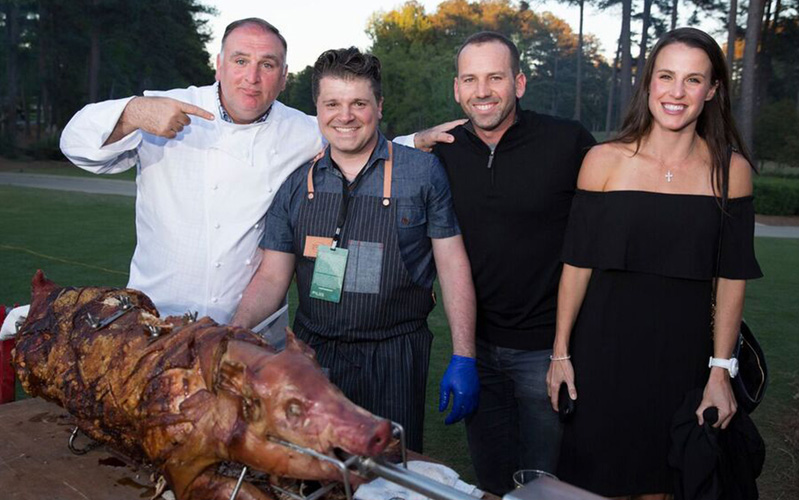 Last week at the 81st Masters Tournament, Spanish golfer Sergio García finally won his first majors title after two decades of near-misses, earning him Augusta's coveted green jacket and a lifetime of bragging rights. But Unfiltered is most envious of a less official prize: García's week spent with el jefe of Spanish-American cuisine and García family friend José Andrés. The affable chef behind 16 Wine Spectator Restaurant Award winners, from his original Jaleo to culinary funhouse Minibar, stayed with the García family during Masters week in Augusta. The chef made himself a useful guest, cooking up Spanish specialties for Sergio and crew when they weren't on the links, even teaming with Garcia's longtime caddie, Glen Murray, to make paella for the bunch. When García sunk the final putt, Andrés jumped in as a translator for the champion's father, Victor. “It was like a little kid, seeing the expression of joy on his face,” Andrés told Unfiltered, calling it “a dream” to see his friend don the green jacket. Then, they celebrated the Unfiltered way: with copious amounts of wine. “We got our hands on anything available and we finished it,” Andrés said, probably not joking. “We celebrated with a lot of Champagne.”

Par for the course for the altruism-minded toque, Andrés also stepped up as chair of the first-ever Taste of the Master Chefs charity dinner, where talents like Hugo Ortega of Caracol, Steve DiFillippo of Davio's Northern Italian Steakhouse and E.J. Hodgkinson of King + Duke cooked up their finest for golf greats to raise money for the Augusta chapter of the Salvation Army. Andrés is already making return plans: Next year, García will be in charge of the Masters Champions Dinner menu, and Andrés hopes once again to lend a hand. “We'll see what Sergio wants to eat and serve; it will probably be Spanish. It's a club with great traditions, I understand that, and hopefully they will let me help advise the menu.” Slow (golf) clap all around.