Written by The Culinary Mind 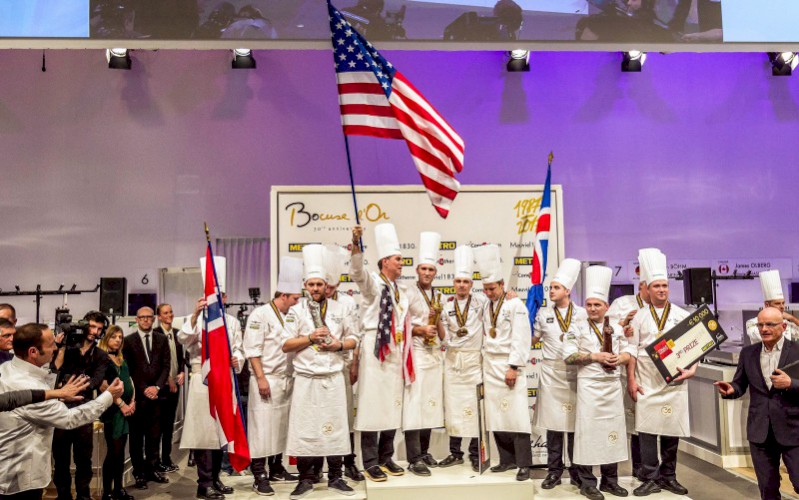 Chances are, until about a week ago, most people in the United States didn’t know what the Bocuse d’Or was. That is until Chef Mathew Peters made history by becoming the first American to win the prestigious competition held every two years in Lyon, France.

Now the question arises, how did Team USA finally come out on top of a competition traditionally dominated by European cuisine.

“The main reasons why America never did well in the past,” says Chef Alan Wong, member of the Culinary Counsel that advises Team USA, “was lack of funds and support.”

The lack of support Wong refers to is made evident in the 2001 documentary, “On the Road to the Bocuse d’Or,” which follows Chef Tracy O’Grady as she prepares for the international competition. The key scene of the documentary shows O’Grady practicing after a long day working as the Sous Chef at Kinkead’s Restaurant in Washington D.C.

Initially, this is a powerful scene as it shows the drive and dedication required to compete at that level. However, this scene also depicts the lack of support given to the competitors who have to find time to prepare for the Bocuse d’Or while still having to make a living.

In an interview with the Washington Post, O’Grady’s mentor, Chef Bob Kinkead described the lack of a support system for Bocuse d’Or representatives in the United States.

“…there hasn’t been an ongoing American support system. There is no tradition of passing on the giant platters from one competition to the next, or the extra equipment and case needed to accommodate the entrant’s mini-traveling-kitchen, or an illustrated archival history of past winners to refer to.”

In the same article, Kikead estimated that final expenses to compete in 2001 Bocuse d’Or added up to approximately $80,000, which fell upon O’Grady and Kinkead.

“Paul Bocuse considers himself to be part American,” says Wong, referring to when Bocuse was injured during WWII, and given a blood transfusion from an American soldier, “so despite being a proud Frenchman, he also wants to see Team USA succeed.”

It is for this reason that in 2008, Bocuse asked Chef Daniel Boulud to develop a support system for the US team. Boulud then reached out to Thomas Keller and Jérôme Bocuse and established the Bocuse d’Or USA Foundation (which evolved into Ment’Or in 2014) with the purpose of providing the necessary infrastructure needed to support and train Team USA.

Ten years after O’Grady’s journey was depicted in “On the Road,” Chef James Kent had a much different experience in the Bio channel four part series, “American Chef.”

Although O’Grady had Kinkead advising her and was able to practice at the Culinary Institute of America, that is nothing compared to group of advisors in the culinary counsel that Kent has access to, as well as a practice kitchen set up by Thomas Keller at French Laundry.With “American Chef” you see Team USA in action.

Despite Kent coming in 10th at the Bocuse d’Or, “American Chef” is still worth watching for the glimpse into the workings of Team USA that it provides.

The progress of Team USA continues in 2015’s “The Contender,” which follows Chef Richard Rosendale as he prepares to compete.

As a result of the ever growing support, Team USA has steadily progressed from 7th place with Rosendale in 2013, to a Silver medal with Chef Philip Tessier in 2015, and this year’s gold medal finish by Chef Peters (who was able to take a year off to prepare for the competition thanks to sponsorship from Ment’Or).By far the best documentary of the three, “The Contender” offers an amazing look at Team USA, which includes building a $150,000 kitchen, which is an exact replica of the one Rosendale will be using at the competition as well as storage locker in France stocked with all the necessary equipment that he and future competitors would need.

Supporting the Bocuse d’Or Team USA is only part of what Ment’Or endeavors to achieve. Ment’Or also grooms the next generation of chefs with grant programs, team and commis competitions, along with staging opportunities at top restaurants around the country.

Ment’Or operates under the mission of “inspiring culinary excellence.” When he joined the foundation’s board of directors, Thomas Keller told Paul Bocuse that the United States would win the Bocuse d’Or within ten years. Team USA did it in nine.

After taking the top of the podium, Team USA stands to continue its evolution with more competitors no doubt looking to take their shot to represent the United States.

Rich Rosendale: The Makings of a Culinary Legend